I recently had the pleasure of guest editing a special sports issue of Canadian Dimension, the first of its kind in the magazine’s fifty year history. Below is my introduction to the issue. Thanks to all of the contributors and to Dimension’s publisher and coordinating editor, Cy Gonick, for the opportunity.

Terry Eagleton has got it wrong. In his 2007 book The Meaning of Life, the literary theorist and doyen of the British Left proclaimed, “It is sport, not religion, which is now the opium of the people.” For Eagleton, the human desire for solidarity and physical immediacy are the raw materials of movements for social change. Yet when these desires are fulfilled through sport, collective struggles go wanting. In Eagleton’s worldview, we either charge the barricades or lace up the skates, march on Parliament or sit in the bleachers, organize a demonstration or organize a softball league.

Yet as the sports-loving, card-carrying leftist contributors to this special issue attest, sports do not supplant social struggle, nor are they simply a ruling-class safety valve for the revolutionary energies of “the people.” Sport, rather, is a terrain of social struggle, a landscape upon which class conflict plays out in both odd and familiar ways, gender norms and identities are shaped and subverted, heteronormativity, racism and the politics of empire are open to contestation. Sport does not stand outside “the struggle” — a distraction from politics proper — but is inherently political. Somewhere between the finest critical sports book ever written, C.L.R. James’s classic on cricket and colonialism, [Beyond A Boundary], and the recent emergence of a new breed of socialist sports writers (including one of CD’s guest contributors, the preeminent left-wing sports journalist of the day, Dave Zirin), the Left chose to treat sport with suspicion, not dialectical thinking.

I can hear the boos from the red seats. Yes, sport — at both amateur and professional levels — often reflects the dominant and interlocking values of neoliberal capitalism, sexism, ableism, racism and imperialism. We need a ruthless critique of sport because as good socialists, it is our duty to engage in ruthless criticism of all that exists. But to dismiss sport as innately capitalist, sexist, and so on — as far too many on the Left have done — is to understand sport, in the words of Charles Springwood, as “a stable, monolithic cultural institution,” not as the site of creative resistance it can be, a space where emancipatory energies emerge, and a new politics of liberation from multiple forms of oppression can take root.

So ignore your lefty instincts; it’s not the picket sign or the tennis racket, the protest or the playoffs. In sport, ideas are in a state of play. We cannot afford to yield sport to the forces of the right — to the free-market fundamentalists and the socially reactionary conservatives — any more than we can afford to yield religion, education, the family or the media. As a reader of CD, you’ll know this is a magazine for people who want to change the world; and if we want to change the world, then we must change the world of sport. 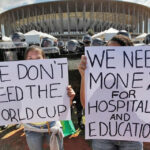 Samba, Soccer and the Limits of Social DemocracyUncategorized